Revvies Energy Strips are a fast dissolving mouth-strip used by runners and triathletes of all levels, including Cassie Fien and Pip Taylor because they offer an instant, convenient and safe caffeine boost that can be taken separately from calories or liquid.

Take 1-2 strips just prior to your next workout and enjoy the Revvies difference.

You may be aware of studies that show caffeine can enhance physical performance, mental clarity, concentration, memory, alertness and can help keep you awake. But did you know there is now research that indicated that that small frequent amounts of caffeine can often work better than one big dose.

Revvies is a Fast, Convenient and Sugar-free way to have a quick caffeine boost on the go.

Here are 5 reasons to try a Revvies:

Every Revvies strip contains 40mg of caffeine (equivalent to ½ a cup of coffee). The caffeine is encapsulated in vegetable oil, which is infused on a starch base, with a small amount of flavouring and sweetener. Revvies are gluten-free, sugar-free and less than 1 calorie per strip. 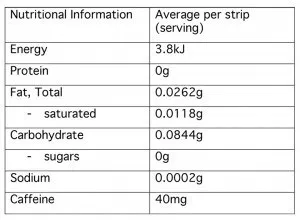